Three... Two... One.. Lift off! Feel the thrill of being an astronaut for a day, with this excursion to Florida's Kennedy Space Center! 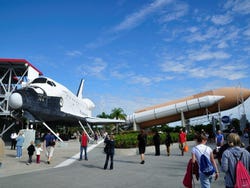 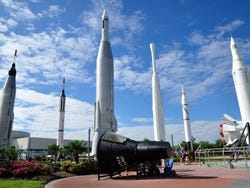 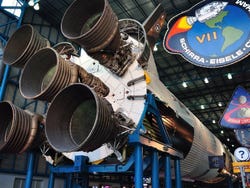 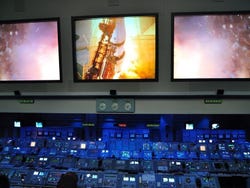 We'll pick you up first thing in the morning from your hotel in Miami, and make our way by bus to the NASA base in Cape Canaveral, in eastern Florida.

At the Kennedy Space Centre, where you'll enjoy a self-guided tour, you'll get to know all about the fascinating world of space exploration. You'll see for yourself the advances throughout the years with the exhibition of some of the most important rockets and space shuttles in history: including Saturn V which took part in the Apollo missions to the moon.

Having seen the spacecraft, you'll want to experience the feeling of a space voyage for yourselves. To get a feel for the mission, you can enjoy an IMAX video, which simulates the experience, and in the NASA hall of fame you'll discover the stories behind the world's most popular astronauts.

You'll also be able to see the platforms where the famous NASA space missions take off, and here you'll discover interesting facts about how the launches take place. And dotted around the centre are interactive panels where you'll discover how the International Space Centre looks, from the inside!

Then we'll meet up again at the entrance to the Kennedy Space Centre to begin our return journey to Miami, where we'll arrive at around 11 pm.

Pick Up in Miami

This excursion includes pick up from hotels in Miami Beach, between 5th Avenue and 19201 Collins Avenue. If you're staying in Downtown Miami, you should head to the Port of Miami Holiday Inn, and if you're staying by the airport the meet point is the Regency Hotel.

When making your reservation you will find a list with various pick up points. Each point will come with the area, name of hotel, address and pick up time. For example: Miami Beach North, Newport Beach Resort - 16701 Collins Ave (05:50).

This day trip does not include tickets to the Kennedy Space Centre itself, and the price per person is about 57 U.S. dollars.

This excursion is free for children under 3, as long as the children travel on the lap of their parent or guardian.

Transport to the Kennedy Space Centre

Entry to the Kennedy Space Centre (from 57 dollars) .

You can book up to 2 days before (Miami local time) if there are still places available.

No (not suitable for people with reduced mobility).

Free! Free cancellation up to 48 hours before the activity starts. If you cancel under this time or do not show up, you will not be refunded.
When the minimum number of participants (2) is not reached, we will contact you to offer you other alternatives.

I travelled with my partner
Show all the reviews

7 / 10 102 reviews
Enjoy a day trip to the Bimini islands, a Caribbean paradise in the Bahamas, only two hours from Miami. Board the boat and get comfy until you arrive at this idyllic destination.
US$ 155
Book
-16%

8.8 / 10 225 reviews
Take a relaxing cruise along the Biscayne Bay and enjoy stunning views of the numerous celebrity mansions, Star Island and Miami Beach.
US$ 32 US$ 27
Book
-6%, New

9.4 / 10 62 reviews
Discover the wonders of Florida and the contrasts of Miami, explore the Everglades and go on a boat ride past celebrity homes - all in one day!
US$ 126 US$ 118
Book